Ice skating has been a popular winter activity in Red Deer for over 130 years.

Leisure skating on the multiple ponds, lakes, and rivers around the city was considered one of the only exercise activities to be done in the winter. In the late 1800’s, almost everyone in the community was able to skate.

Around 1900, a covered skating rink was built.

Both men’s and ladies’ hockey teams played out of this rink and several skating carnivals were hosted there each year. It was a very important venue of winter entertainment in Red Deer. 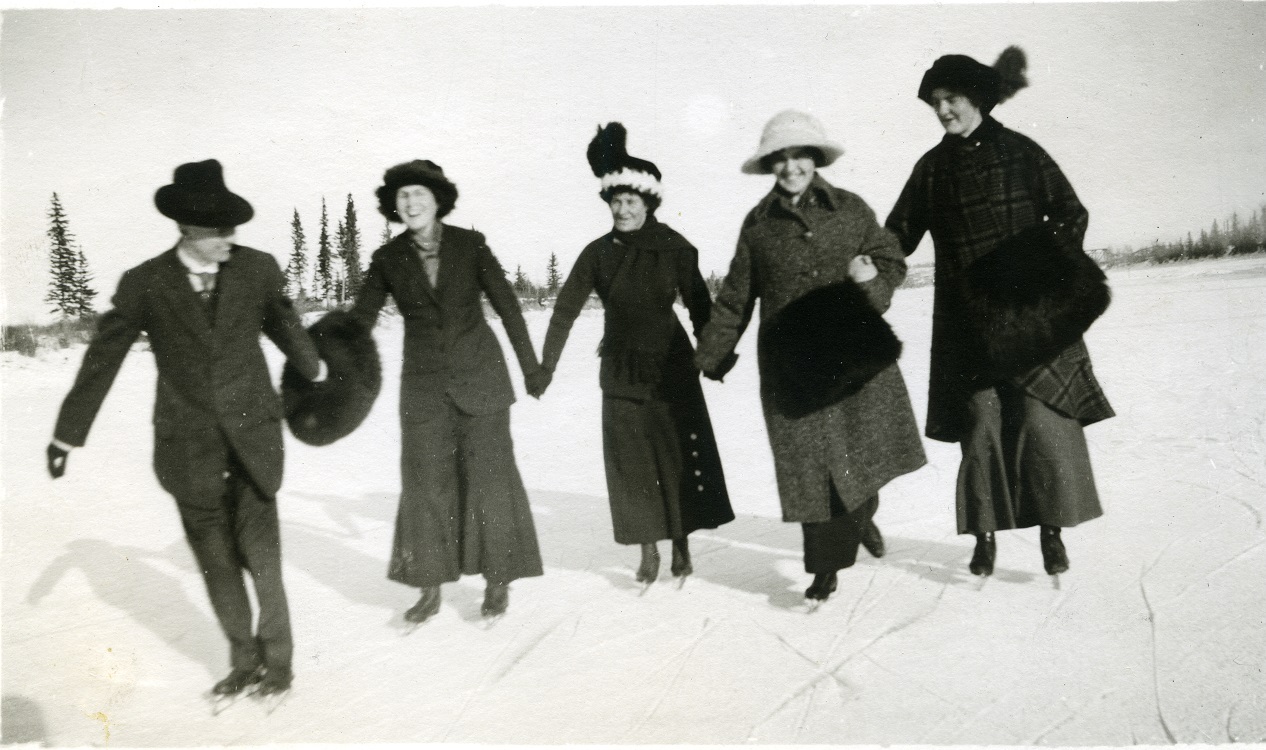 Four women and a man ice skating. Florence Cottingham is in the middle. [ca. 1925?] P15239, Photo courtesy of the Red Deer & District Archives.

Unfortunately, the roof of the skating rink collapsed in January 1907 and the rink was never rebuilt.

The citizens of Red Deer mourned the loss of their covered rink. Without a rink of their own, the Red Deer hockey teams disbanded, and skating carnivals ceased.

Each year, the Red Deer News newspaper published their annual pitch to town council for a new rink.

The new covered rink brought hockey back to Red Deer.

The Red Deer Ladies’ Hockey Club started up again in January 1926 and practiced out of the new rink. The men’s hockey club also claimed the new rink as their home rink and went on to win the Alberta Intermediate Provincial Championship in 1926.

The MAG collection has several sports jerseys, including the below “Red Deer Bottling” hockey sweater.

Local businesses often sponsored community sports teams. Today, jerseys are made from synthetic materials like polyester, but traditionally, they were made of wool in order to keep players warm. Hockey sweaters fit close to the body as the protective padding players wear today was not mandatory yet. Felt-lined undershirts, felt or animal fur padded gloves, and leather shin and kneecap guards were the common pieces of padding players wore when this hockey sweater was in use. 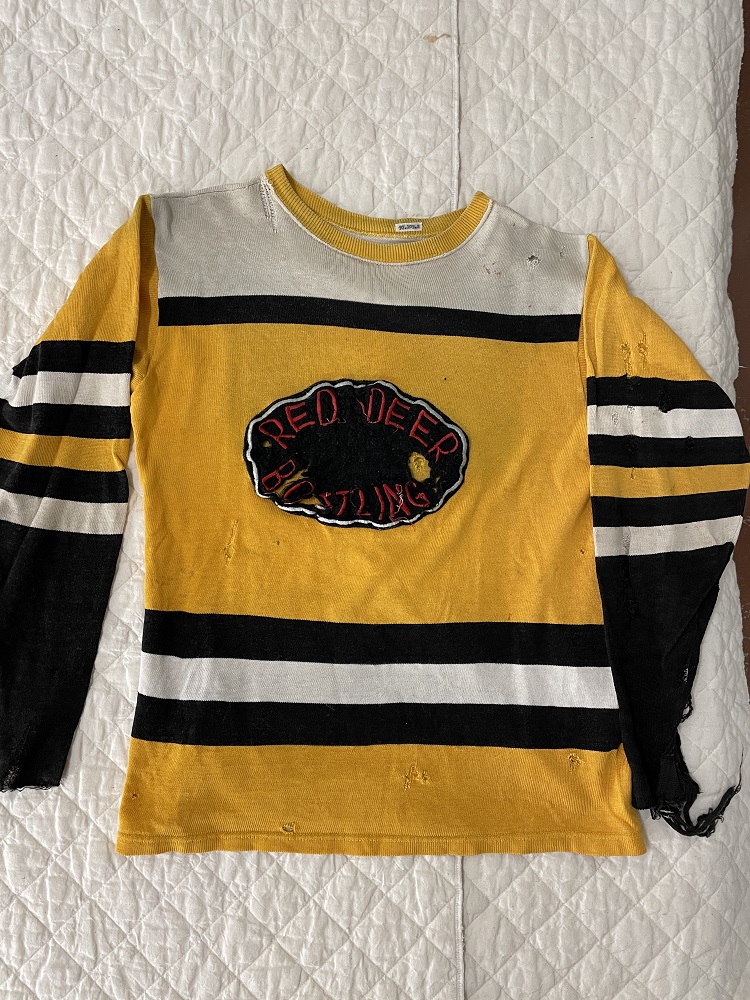 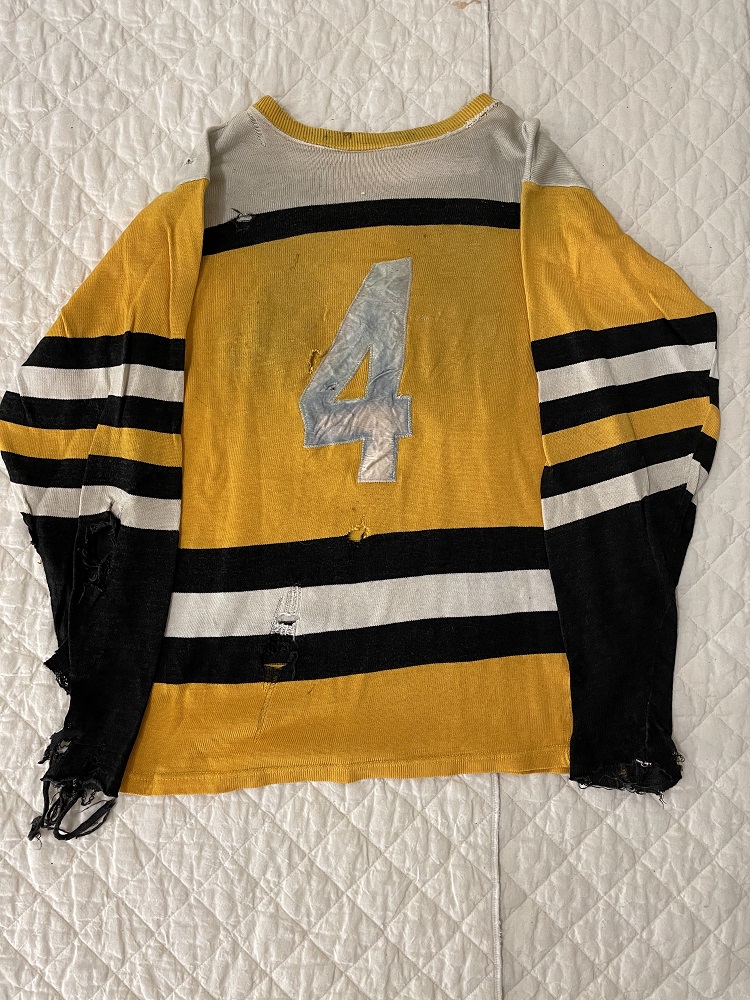 Over the years, skating in Red Deer expanded. In 1953, the Red Deer Central Lions Speed Skating Club was founded. This club has seen members succeed in regional, provincial, and national competitions. Some members have even represented Canada in the Olympics!

The Red Deer Figure Skating Club was founded in the 1960s. Today over 1500 members learn to skate through the Club.

We are lucky to have a few skating costumes in the MAG collection.

One of the costumes is the below mid-century blue and white cotton gingham costume. It’s similar to modern figure skating costumes; however, it uses a woven fabric very different from the stretchy synthetic dance fabrics common today. Figure skating costumes have traditionally been shorter than regular clothes, both to allow greater freedom of movement and to help show off the complex movements of the skater. 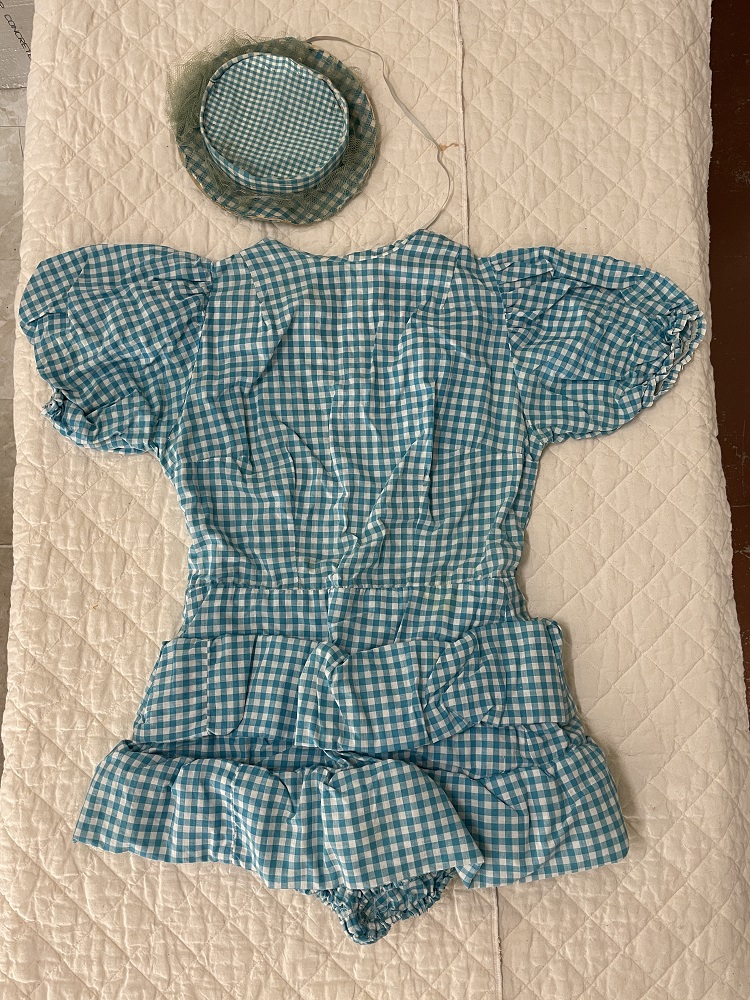 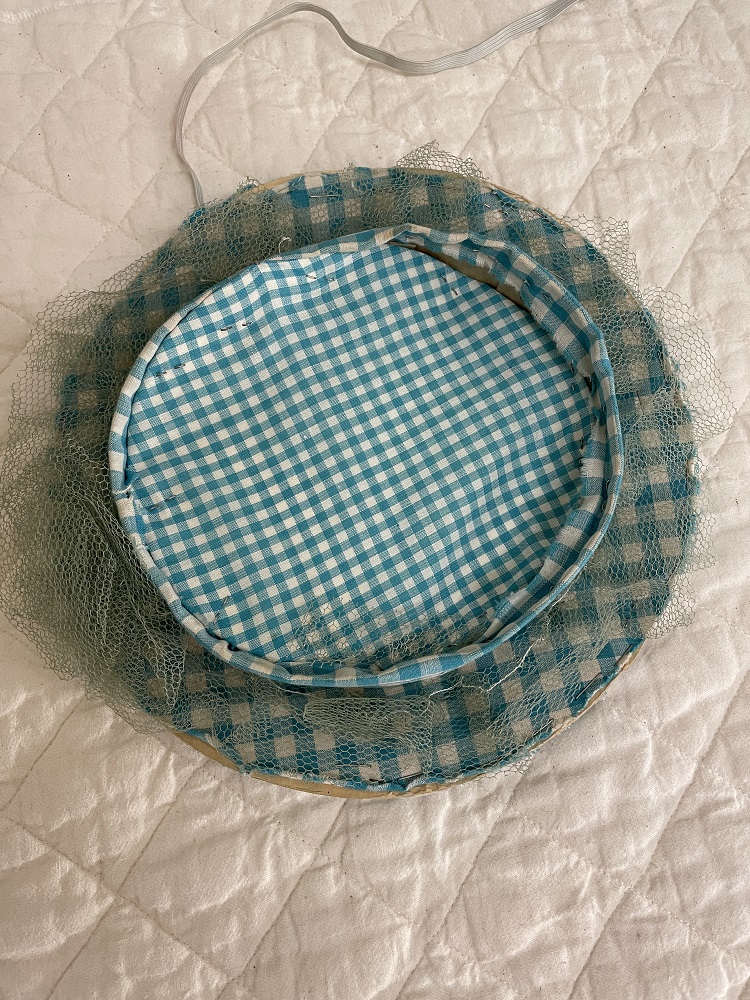 Another similarity with modern figure skating costumes is that it is homemade. Custom dance and skating costumes can be very pricey, so it’s common today to have family members make the outfits at home. Since the costumes are only seen from afar, they are often more quickly or cheaply made. In this case, the hat is fabric-covered cardboard, stapled together and held onto the head with a length of plain white elastic. This would have served well for a costume meant for a performance on the ice!